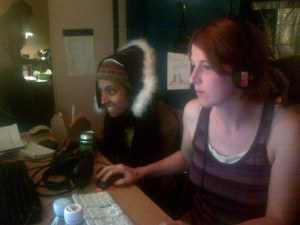 Laura (right) editing in a BBC portacabin at Bestival music festival on the Isle of Wight, 2007.

Laura Taflinger has been working as a Final Cut Pro video editor since 2005. With a professional background in written content, web and video production, she is most often employed as a one-woman band, researching, interviewing, shooting, editing, writing up and optimizing multimedia content for websites.

After graduating with a degree in print journalism from Indiana University in 1998, she moved to San Francisco during the dot-com boom and did web content and editorial work. She moved to London in 2003 and worked on hundreds of non-fiction videos, from feature and short documentaries to corporate promos to educational DVDs to behind-the-scenes pieces to West End stage performances. Laura returned to the U.S. from 2011-2015, moved into e-learning and got a master’s in Educational Technology from the University of Arizona. She is currently working for BBC Academy in Birmingham, UK.

She can be contacted by e-mailing her first name at her last name dot com.